How has the spread of COVID-19 impacted the fashion industry?

Lombardy and other regions in the north are home to many luxury names, including Prada, Armani and Versace, while international brands from Louis Vuitton to Stella McCartney rely on Italian manufacturers and suppliers in the production of their clothes, accessories and footwear.

About 60% of Italy’s textile and apparel manufacturing capacity is in the lockdown area, along with 10% to 20% of leather goods and about 20% of jewellery.

While the rapid spread across Italy has prompted other European countries to adopt similar drastic measures to help prevent the risk of infection, a lot of criticism has been levelled at  on the retailers that continue to operate over the risks they place on their workers.

“We are at war,” said France president Emmanuel Macron, addressing the nation. The escalation of the emergency in France has further intensified the pressure on the Italian luxury supply chain, adding order cancellations from French clients on top of those received from Italian and Chinese clients.

What to do next? Innovative strategies in a nutshell

Following shows remotely raises concerns that the in-person ‘visceral’ and unique moment will be lost; however, there are early explorations of how fashion events could pivot to digital, a move that could become increasingly common.

Fashion Innovation Agency has worked on a number of projects that use augmented, virtual and mixed reality, a group collectively referred to as cross reality or XR, creating a sense of immersion and connecting people more than ever. Vogue Business reported that this year, YouTube’s new fashion vertical, /Fashion, has live-streamed more than 40 runway shows, including newcomers Bottega Veneta, Jonathan Simkhai, Tod’s, Marni and Lanvin, gathering over 4million views. In China, live streaming is already a popular way to shop and see collections, withbrands embracing local platforms.

When it comes to showrooming, an ‘exhibition mode’ would allow viewers to swipe to see new designers, save what they like, and immediately access an order form. This would allow organisers to view who has checked in and what they are interested in. The quality of content is also crucial: brands need more immersive, interactive and explorative camerawork. This could be combined with  sensory experiences, like smelling something simultaneously, or fabric swatches.

In 2014, editor and stylist Mary Fellowes was editing content for fashion show venue Milk Studios. In place of guest editors, she commissioned a drone to cover the shows by flying among the models backstage and in the front of the house (Vogue Business).

Moreover, in direct response to travel restrictions, designer Steven Tai released his lookbook online, using technology that allows viewers to digitally spin images of models a full 360 degrees, and showcases additional detail by highlighting fabrics and construction, going beyond the issue of static imagery content, allowing customers and viewers to control each part of the piece they are viewing.

Companies have invested in 3D-designed garments and digital showrooms that allow samples to be created and viewed digitally: @LouisVuitton quickly digitised its collection so that its site visitors could zoom in to each detail. Virtual showrooms, where buyers can view and order designs remotely, are on the rise, leading the way to transparency, quicker order turnaround times and easier communication. Some technologies that might further mimic physical events are on the horizon: holograms, or hologram-like content, can make it seem as if a person or object is in a particular environment. Haptic gloves, for example, could replicate the sensory feedback one might get from touching a garment, with gestures such as nods or waves allowing buyers to move. A brand could allow the viewer to watch a model walk a traditional runway just as they would in real life, turning from right to left as they passed. Brands like Rag & Bone, Balmain and Diane von Furstenberg have tested VR fashion week content, while Ordre, the 360-degree image company, also offers virtual reality showrooms. In 2018, entertainment industry veteran David Nussbaum, who has created live ‘holoportation events’ for celebrities, worked on a large-scale hologram runway show for Christian Dior. The project filmed 68 models at Paris’s Musee d’Orsay, turning them into 20-foot holograms.

“I think the most innovative retailers are understanding how these digital and physical channels work together. I think people who are talking about the retail apocalypse and the end of the store are incorrect - yes, there is a shakeout happening on high streets, but in all of those places where you see stores closing, you see new ones opening up. Having a physical presence is a really important part of creating that connection with the customer”

Here at SteffyB; we will continue to work remotely and to promote the Evolution / Revolution of the fashion industry day by day.

Stay safe and take care of yourselves <3 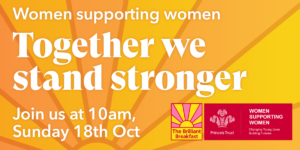 SteffyB presents The Brilliant Breakfast: Together we Stand Stronger

A breakfast event for women to honour our power and uniqueness

Together, women are stronger: Supporting women during challenging times

The recent months have brought about many difficulties for people all around the world. Health complications, job losses, lockdowns and enforced separation from friends and family have all impacted many lives, but women as a group have been particularly affected by the reality we face in the aftermath of COVID-19.

Isolation hacks, wherever you are

Last night, I downloaded Houseparty to hang out with my best friends and this morning had an intense dance core session. Dancing in the house counts as a workout, right?